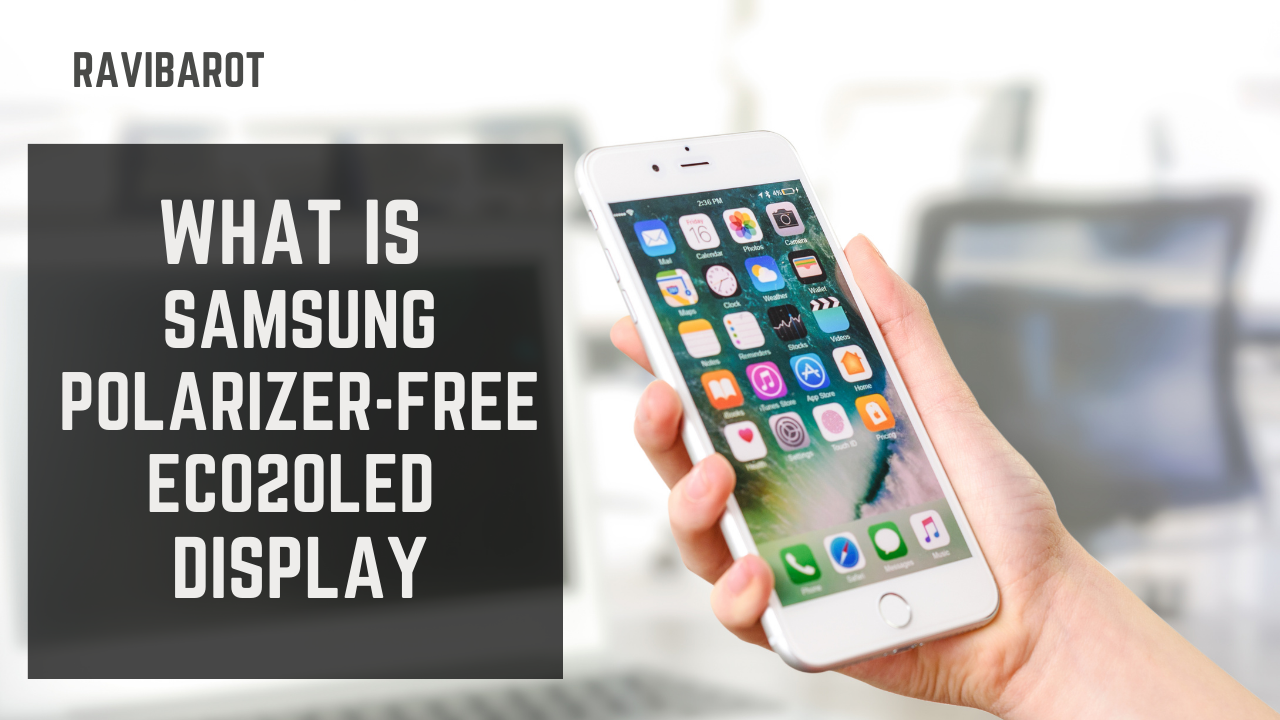 Samsung Display Announces Polarizer-less OLED With 25% Less Power While the news is brief, it represents a significant technological advancement and shifts from previous generation OLED panel technology, as the new panel type does not require the use of a polarizer layer between the actual panel and the cover glass.

The actual panel of a standard OLED panel is copper-coloured, which, of course, does not work well for displaying black. Displays employ polariser layers to create a reflective black by blocking light from entering and reflecting off the display, allowing only light generated by the display to pass through the glass. 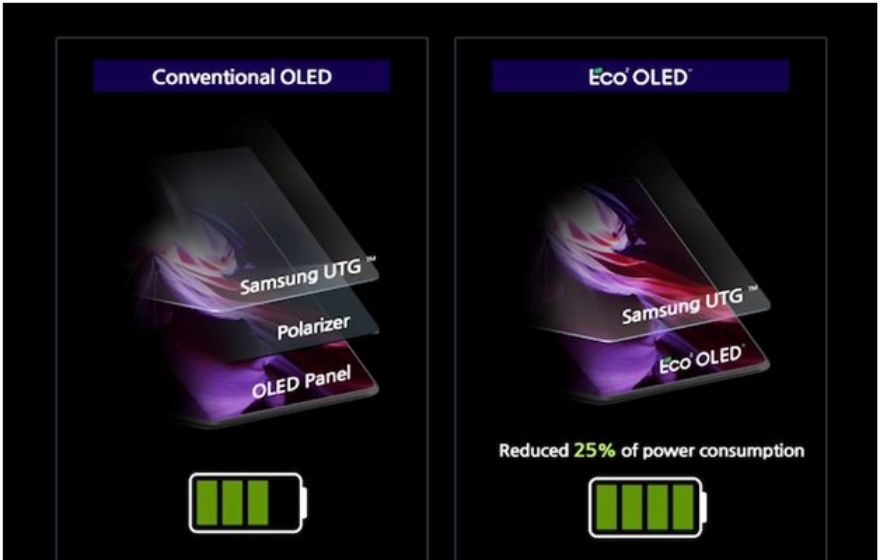 The difficulty with such layers is that they have a low transmittance, which means that the polarizer eats some of the light output by the panel. The cover glass and polarizer of an outdated Galaxy S7, for example, appear noticeably darker than the light background in the image above.
Samsung claims that they have eliminated the polarizing layer and are now able to produce non-reflective OLED panels that display black. This is a significant improvement in the display stack. Samsung claims that they can increase transmittance by 33 percent, resulting in 33 percent brighter screens or a 25 percent reduction in power usage at the same brightness.
These are huge numbers, and they should represent one of the most significant increases in power efficiency in OLEDs since their birth.
According to Samsung Display, the Eco²OLED is already used in Samsung Mobile’s Galaxy Z Fold3, indicating that this will be the first phone to incorporate the technology. Along with this year’s broad adoption of LTPO panels, which vastly increased power efficiency, this could herald a new major leap in smartphone power efficiency, extending the battery life of devices that use the technology.
Here is a list of foldable phones that are currently using the Eco²OLED. 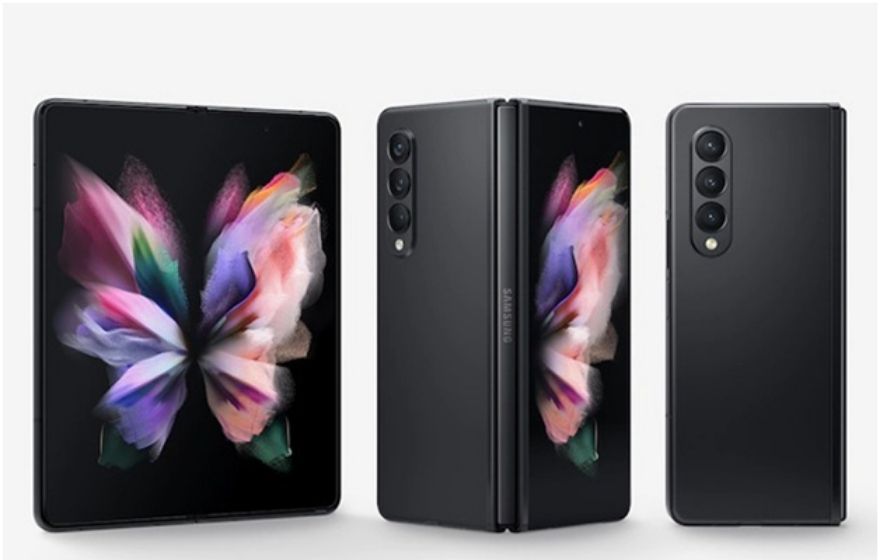 The Samsung Galaxy Z Fold 3 5G is the company’s third folding phone, and it’s a step up from its predecessors. The phone boasts a 7.6-inch Dynamic AMOLED 2x display with a resolution of 2208 x 1768 pixels and a refresh rate of 120Hz. This panel, known as the Infinity Flex Display, bends in half to reveal a 6.2-inch screen. That cover panel is big enough to use as a phone. When you turn on the phone, you’ll see OneUI 3.1, which is based on Android 11 and has custom software customizations. 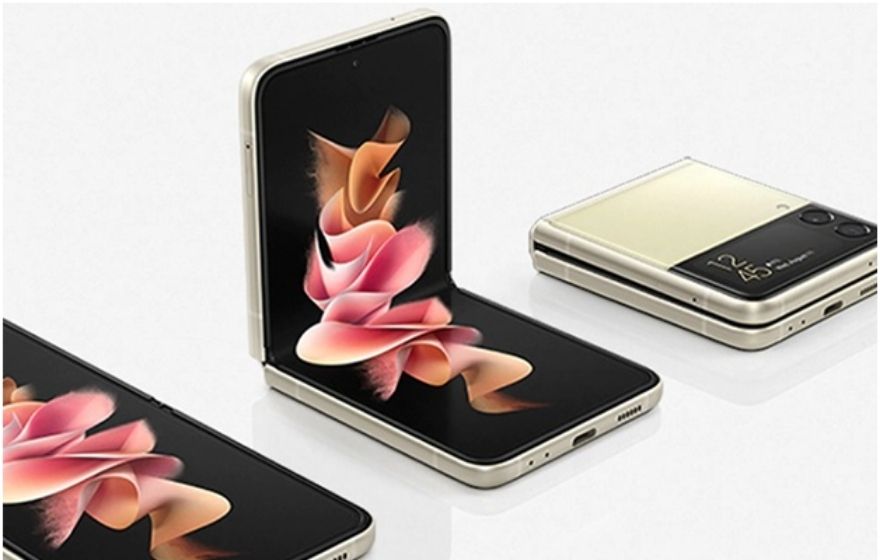 Samsung has released the Z Flip 3 5G, riding high on the success of the Galaxy Z Flip. To match the Z Fold nomenclature, the brand dropped the Flip 2 label. In any case, this is still a flip-and-fold clamshell with a new ‘hideaway’ hinge mechanism. Thanks to this collaboration, Samsung can promote a variety of use cases from various perspectives.

It comes with a Snapdragon 888 processor, 8GB of RAM, and 256GB of internal storage. A 3300mAh battery with 15W charging capabilities is also included in the internals. One UI is an Android 11-based program. There’s also 5G, a USB-C connector, a fingerprint scanner on the side, Wi-Fi 6, Bluetooth 5.0, and 4G LTE. The samsung galaxy z flip 3 5gphone priceis $1209.

The Eco2OLED display claims to solve both problems by removing the usual polarizer layer, which increases transmittance (screen brightness) by up to 33% while lowering power usage by up to 25%. To put it another way, the new panel technology allows for a brighter display while consuming less electricity. Samsung claims that by removing the polarizer, the Eco2OLED enhances light transmission to the under-display camera.

The Eco2OLED screen makes its debut as a foldable display on the upcoming Galaxy Z Fold 3. Samsung hasn’t said whether the new panel would be used on any forthcoming Galaxy devices.

Want to replace your Menu boards by the hour and daily to accommodate for Breakfast, Lunch, or Dinner menus or change prices? Try our modern Digital Menu Boards what let’s you quickly show off your food, pricing, and features with the click of a key. Between our durable designs and easy-to-use features, the KiwiSign digital menu boards offer competitive menu options for your customers.

In this modern age, a Laser printer is an indispensable part of the workplace. There are several different types of Microwave Ovens in the market. Due to the variety,

Are you searching for essential accessories for new laptop buyers? In this 21st century, our