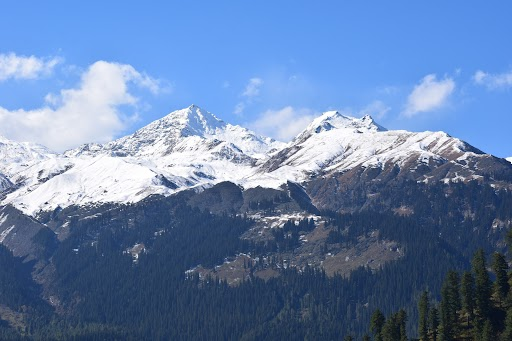 The Kheerganga trek is said to be the most popular and well know of all the hikes at Parvati Valley. this trekking spot takes you through some of the spectacular landscapes. It does not require a lot of time or prior trekking expertise, making it ideal for any beginner trekker or traveler. You can witness those breathtaking natural beauties of nature while wandering through the regions of Himachal Pradesh’s amazing countryside. There are a few wooden bridges and several slick spots on the trail. During the trekking at Kheerganga starting from Kasol one gets to rest their eyes upon those plethoras of beautiful waterfalls which should be captured as photographs of each one of those beauties.

To get to Bhuntar, take a private Volvo bus from Delhi’s Majnu Ka Tila or Rama Krishna Ashram Metro Station. Taking the HRTC Himsuta Volvo from ISBT Kashmere Gate is a recommended and punctual choice. All Volvos depart from Delhi in the evening and arrive in Bhuntar about 5 a.m. to 7 a.m. Bhuntar is the settlement where the route to Parvati Valley splits, as well as the spot where the Beas and Parvati rivers meet. Request that the bus drops you off near the Bhuntar bus station, where you may board a bus to Barshaini. Barshaini is the valley’s last motorable route, coming after Kasol and Manikaran. Buses run frequently between Bhuntar and Barshaini, covering the journey in around 2-3 hours. Breakfast should be consumed at Bhuntar while waiting for the bus.

Summer and autumn are the finest seasons for visiting Kheerganga. commonly it is May to June, and September to October are said to be the ideal months to take up this trekking journey.

As I previously stated, it is a pretty easy hike that can easily be completed with children. Kheerganga, at 2960 meters above sea level, is the finest walk for novices.

Kalga village: as you arrive at Kalga after a 30-minute journey you will be blown away by the beauty of this charming little community that exudes the peace that everyone desires these days. You can enjoy at the nearby cafe sipping hot tea as our daughter ate Maggi while soaking in the amazing surroundings. The people in Kalga were friendly and upbeat. They pushed us to take our daughter on a walk to Kheerganga, saying that it would be foolish to leave such a lovely site untouched when you are so near to it.

Parvati valley: Parvati Valley, in Himachal Pradesh’s Kullu district, begins above Bhunter, where the Parvati River meets the River Beas and continues eastward to Mantalai Lake which is also said to be the source of Parvati River. The valley is so breathtakingly gorgeous that it touches your heart.

Kasol: Hearing a lot about Kasol, piqued my interest because of its diverse culture, food, and abundance of natural beauty. Kasol is well-known among travelers and those who enjoy staying high i.e by using Charas or Marijuana. The area has a wonderful mix of Israeli culture, stunning scenery, and untouched nature. Though Kasol is not a wonderful place for a family vacation, you can’t deny the satisfaction that comes from doing something different.

Original ID card for any emergency checking purposes. Torch with a LED along with extra batteries, an item that is required. Warm clothing is required. Caps that are both woolen and also sun caps. Wipes and toilet paper. Pack for the day (20-30l). Water can which can be refilled whenever possible. The second pair of socks. Thermals as per your requirement and fleece jackets to keep oneself safe from heavy cold weather conditions. Shoes for hiking. Insect and mosquito repellant. Thermoplastic inners

Lord Shiva or his son Kartik, according to others, visited Kheerganga and pondered for thousands of years. The name Kheerganga means “milky white sacred water” in Hindi. Natural hot springs’ water is white like milk, and taking a bath in it is regarded as sacred and peaceful. The surrounding temple is also thought to be fairly old, and Kheerganga is the home of Lord Shiva according to the locals. It’s a spiritual location. Even in the summer, it can get rather cold in Kheerganga, thus bringing strong woolens is recommended. One legend claims that Lord Shiva meditated here for thousands of years, while another claims that Kartikeya, Lord Shiva’s son, and Parvati meditated here, and the natural spring emerged when Shiva struck the ground with His Trishul on Parvati’s request, as she was concerned that her son would go hungry here.

Your Cameras are now clicking pictures at the weddings of relatives, of limited vegetation

It likewise gives a name to the Nag Tibba Range, which is one of the

The U.K. is an enormous country that merely requires aunty introduction. When we talk